Former Bush Adviser:
Obama is “Using His Power
to Rig Midterm Elections”
…now Obama has decided that controversial new EPA regulations
on coal plants that originally were to be issued soon won’t be
announced until after the midterm elections.  Given how much of
middle America which depends on coal is outraged on Obama’s
environmentalist-fueled War on Coal, this shouldn’t surprise us.
More Here:
http://conservativetribune.com/ob
ama-rigging-midterms/#more-2898

The Family of Freedom:

Since the corrupt presidency of Viktor Yanukovych was brought to
an end by the Ukrainian people and Russia responded by forcibly
reintegrating Crimea, the election had to be brought forward to
three weeks from now. The success of these elections will have
reverberations that echo not through just the rest of Europe but
anywhere where democracy is prized over sheer might.
More Here:
http://www.breitbart.com/Big-Peace/2014/05/0
4/The-Family-of-Freedom-Why-Ukraine-Matters

Ukraine Crisis: ‘This is Not Some Kind
of a Short-Lived Uprising…It is a War’
……….Jews Preparing to Evacuate Ukraine
……….Russian Bombers, Fighter Jets ‘Seen Over Crimea’

‘Facebook Must Wake
Up and End the Hate’
By Ben Garrison
“This is the message I received after
reporting a hate page on Facebook…”
“This page wasn’t removed. We reviewed the page you
reported for harassment. Since it did not violate our
community standards, we did not remove it.
Thanks for your report.”
Near the top of the hate page was a statement that
encouraged the extermination of all Jews. Along with
that statement was a photo of my face and the name
Ben Garrison. Trolls had stolen my artwork and photos
from my blog, my cartoon site as well as my fine art site
and had concocted an entire page devoted to spewing
libelous hate. The troll entity called the page ‘Ben Garrison
Cartoons—the Official Site.’  The trolls had stamped the name
‘Ben Garrison’ onto as many hateful images as possible
throughout the page. How does one stop such blatant libel?
Where do these trolls come from? Is it even possible to track
them down? Why do they do such terrible things? Why me?
More Here:
http://www.grrrgraphics.com/

Intolerable! Explores the rise of the Tea Party.
It answers questions like; Who is behind it?
What’s the real motivation? Where does it go now?
Enjoy Intolerable for FREE, but donations are appreciated!
A portion of profits will benefit “Mercury One.”
Thank you for your support!
Please share this with others so the truth will be known.
40 Min Documentary Here:
http://intolerable.us/ 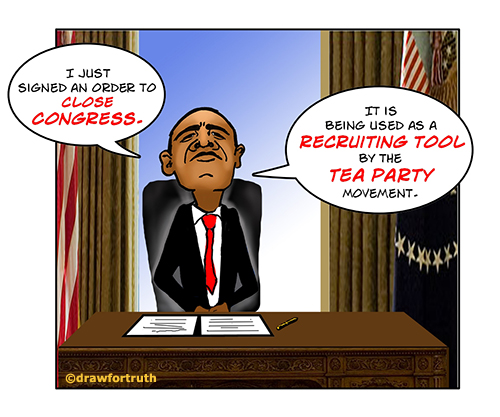 STACY MCCAIN HAS DECLARED THIS WEEK*

Hat Tip to Zilla of the Resistance
@ZillaStevenson on Twitter

Girls held by Boko Haram face auction,
life as sex slaves, if rescue fails
The hundreds of Nigerian girls, mainly Christian teens, kidnapped
by Boko Haram could face a life of misery, as slaves or child brides
sold for a pittance in the markets across the globe if they are not
rescued soon, humanitarian experts say.
More Here:
http://conservativebyte.com/2014/05/girls-held-bok
o-haram-face-auction-life-sex-slaves-rescue-fails/

shrink from the challenge.

http://www.israpundit.com/archives/39829
“Terror can be conquered only with greater terror.”
~ Vladimir Lenin ~
“While we should never give up our principles, we
must also realize that we cannot maintain our
principles unless we survive.”
~ Henry Kissinger ~

Pelosi: People Are Tired of Benghazi

“The American people care about jobs,” Pelosi said. “They care
about their families, and the education of their children and health
of their families and that — somebody said to me yesterday, either
people have gotten tired of Benghazi or they never knew about it
in the first place. So let’s not be accomplices to this diversionary
tactic. It is all subterfuge because they don’t want to talk what
our responsibilities are here.”

http://www.breitbart.com/Breitbart-TV/2014/
05/09/Pelosi-People-Are-Tired-Of-Benghazi
And why don’t many Americans know about the heinous facts
of Benghazi? Because of our great nemesis, the media partners
of the Democrats.
Consider…if the corrupt media were informing our countrymen
truthfully about the equally corrupt escapades, scandals, and
outright lawlessness of the Obama regime, that regime would
have been drummed out of power years ago.
The media are, in fact and deed, collaborators against the
safety and sanctity of their own country. Traitors.
~ Bruce ~

Researchers from the Peter MacCallum Cancer Centre in Melbourne,
Australia, have found that a N-methyl-2-pyrrolidone (NMP), a common
solvent used in a wide array of industrial and medical products, has
cancer-fighting properties. The discovery came about thanks to an
observant researcher, and now the solvent is set to be put to the test
in a world-first clinical trial on patients with advanced blood cancer.
More Here:
http://www.gizmag.com/peter-mac-solvent-cancer-trial/31984/

~ The E-Blast ~
Created by Bruce O’Hara
can also be viewed online
at:
http://e-blast.blogspot.com/