What the Beatles, Alexander Hamilton and Lyndon B. Johnson tell us about happiness 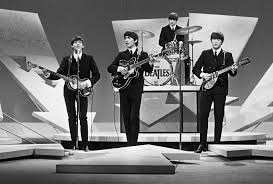 And I’ll be satisfied

Tell me that you want the kind of things

I don’t care too much for money

As pop culture legend has it, the British reinvaded American soil fifty years ago this week. But instead of propelling modern-day Paul Reveres to sound the alarm throughout the American countryside, the British invaders, the Beatles, were met with teenage female screams and a television audience of Super Bowl proportions on The Ed Sullivan Show. The outpouring of love for the band led many to suggest that they were the perfect remedy for a nation mourning the tragic assassination of President John F. Kennedy.

Beatlemania grew through the Spring of 1964 with their release of  “Can’t Buy Me Love,” which jumped to the top of the charts in record fashion, leaving the band with the top five Billboard singles (a first in music history). The Beatles’ song on the things money can and cannot buy was a mainstay on American radio waves as President Lyndon B. Johnson charted a new course for the country in speeches at Ohio University (May 4, 1964) and the University of Michigan (May 22, 1964)–putting money and power in the service of national greatness:

For a century we labored to settle and to subdue a continent. For half a century we called upon unbounded invention and untiring industry to create an order of plenty for all of our people. The challenge of the next half century is whether we have the wisdom to use that wealth to enrich and elevate our national life, and to advance the quality of our American civilization. Your imagination and your initiative and your indignation will determine whether we build a society where progress is the servant of our needs, or a society where old values and new visions are buried under unbridled growth. For in your time we have the opportunity to move not only toward the rich society and the powerful society, but upward to the Great Society.

For LBJ and progressive elites, the next chapter in the American story amounted to employing national wealth and political might in the service of greatness that could only be achieved if all Americans partook in the American dream. National efforts would not so much amount to producing more wealth and power as checking “unbridled” growth, presumably induced more by a spirit of “indignation” than “imagination” or “initiative.” American power and wealth would take the nation only so far;  a moral reckoning of who gets what, when, and how was what the country needed in its next half-century. But one wonders whether employing the nation’s wealth and power as envisioned in LBJ’s speech spread more love or indignance moving forward.

President Johnson sought to “begin to build the Great Society in our cities, in our countryside, and in our classrooms.” But these are perhaps the last places we would look for national encouragement today.

The centerpiece of Johnson’s urban program was the Economic Opportunity Act, meant to aid the poor through programs they helped design and manage. The result, however, as Charles Murray’s landmark study, Losing Ground, demonstrated, was anything but empowerment for the urban poor. A second key feature of the law allowed the federal government to bypass state governments and give funds directly to local municipalities, setting in motion the cycle of debt and dependency that has placed many an American city on the road to Detroit-style bankruptcy. Just last week, the Chicago City Council authorized increasing the debt load of the city by $1.9 billion–even after multiple debt rating downgrades last year left Chicago paying more in interest on its general obligation debt than it does in principal. According to one report, Boston’s situation is even worse and Baltimore, Houston, and New York’s no better.

President Johnson’s primary concern about the countryside was environmental degradation, but three months after his speech he signed into law a bill creating the program that is now the cornerstone of our “farm” policy: food stamps (47 million recipients strong today). Just last week, President Obama signed the latest “farm” bill. The 10-year spending breakdown: $756 billion (79%) for food stamps, $56 billion for conservation (6%), and plenty of Big Agriculture corporate welfare.

Many Americans in 1964 hadn’t completed high school much less a college education. To address this, Johnson proposed the Elementary and Secondary Education Act, the beginning of the end of more than three centuries of local control in American public education. In the years since, the combination of financial carrots and regulatory sticks has given the federal government de facto control over most public schools. Just last week, Georgia Congressman Phil Gingrey introduced a bill to amend Johnson’s original law to prohibit the Education Department from using financial incentives to entice states to adopt federal curriculum standards–but, in the meantime, while more Americans graduate from high school and college than ever before, they enter a workforce more in need of remedial education and debt relief than ever before.

In every area of Johnson’s extraordinary federal action, the results weren’t merely disappointing; they were all but perverse. Citing Aristotle’s claim that the city ultimately exists not merely for living, but for living well, he called Americans to build a “society where the demands of morality, and the needs of the spirit, can be realized in the life of the Nation.” This enterprise reached its farcical conclusion last week, as Democrats spun a disastrous CBO report on Obamacare’s impact on labor force participation (already at a 35-year low) into a celebration of Americans’ graduation from “job lock” to “government lock.”

Johnson, like many 20th century Progressive public servants, hoped that by spending monies to make the race of life more fair, he could encourage participants from all walks of life to come together for the public good. The Haves who had been given much would feel better for giving back what was required of them. And the Have Nots would forgive nature and circumstance for its trespasses against them. But leveling the playing field has not leveled the award stand of life. Fifty years after Johnson hoped harnessing the nation’s wealth and power could buy us greatness, we’re still left with the inequality that for many is the defining challenge of our day; albeit with the heightened reality that we don’t have as much power or money as we once thought, and perhaps with an increased sensitivity that the problem we’re trying to solve involves many more factors than simply money and power.

In Federalist 30, Alexander Hamilton introduces the subject of granting the general government direct powers of taxation upon the American people by emphasizing the role that money plays in governance:

Money is, with propriety, considered as the vital principle of the body politic; as that which sustains its life and motion, and enables it to perform its most essential functions. A complete power, therefore, to procure a regular and adequate supply of it, as far as the resources of the community will permit, may be regarded as an indispensable ingredient in every constitution.

For Hamilton, a government borders on annihilation when it lacks the necessary financial resources to accomplish the tasks it has been assigned. Hamilton biographer Ron Chernow writes of Hamilton’s experience attempting to collect taxes for the Congress from the State of New York:

The few months that Hamilton spent trying to gather taxes demonstrated anew the perils of the Articles of Confederation. States regarded their payments to Congress, in effect, as voluntary and often siphoned off funds for local purposes before making any transfers. This situation, combined with a lack of independent federal revenues, had forced the patriots to finance the Revolution by either borrowing or printing paper money.

In Hamilton’s America the general government lacked the means to accomplish its necessary ends, beginning with national defense. Hence his sharpest rebuke for his opponents in Federalist 30 is to those who “hope to see realized in America the halcyon scenes of the poetic or fabulous age” as opposed “to those who believe we are likely to experience a common portion of the vicissitudes and calamities which have fallen to the lot of other nations….”

Hamilton’s sober response is the counterpart of the Beatles’s more lively refrain: money can help secure a political environment in which citizens pursue love and happiness, but it can’t buy us love and happiness in a fallen world.