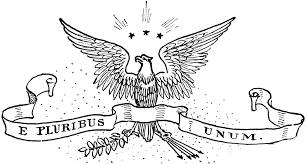 American ancestry is drawn from the various nations of the Earth. As such, there’s no language or custom that conceivably couldn’t be found within our ranks.

E Pluribus Unum or “out of many one,” is a saying lost in the modern tower of Babel that’s become our contemporary culture.

We have a common language, English, despite encroachments from the South West, which allows us to communicate.

This language has its own diversity in the form of regional dialects and slang. Still, we do have a national tongue and should resist efforts to demote it.

Balkanizing and ghettoizing ourselves, regardless of color, accomplishes little more than making the country easy pickings for communists who’ve stirred simmering discontent for generations.

The military addressed this issue by telling recruits their new pigmentation was “green ” or whatever the service color happened to be.

In this way, individual characteristics became the central issue, as opposed to ethnicity. While not fool proof, the military became a race-relations model civilians found beneficial.

This recession has united us, those with sense at least, in a misery the likes of which hasn’t been seen since the Great Depression.

Skin tone; zip code; education; political party and other labels succumb to the grinding need to either become allies or antagonists.

American History Month is a rallying cry to strengthen ties that bind, instead of carping about what various ethnic teams didn’t get from a high-taxing Uncle Sam.

The Demo-crack party addicted all kinds of Americans in this desperate time. Those who still believe traditional values and free markets are the answer need to join forces.

“Out of many: one!” is what we should keep in mind.

It doesn’t matter what ship your ancestors arrived in, we’re in the same boat now.